GAS DRILLING - NOT IN MY WATER SUPPLY

THE BIGGEST CASUALTY OF GAS DRILLING WILL BE YOU!

The implementation of gas drilling is being fast tracked. The number of opportunities to impact the outcome is dwindling. If all of us who get our water from as well as live in, and love the Catskills don't stand up now, the results are very likely to be catastrophic.

There is an unacceptable disregard for the potential public health issues that have been documented to be a byproduct of natural gas drilling. In part these come from the toxic chemicals that are used in hydro-fracking (the process by which gas is released from the shale rock formations deep underground). These chemicals are being knowingly injected into our air, drinking water and blood streams without our knowledge or consent. Unless we are able to effectively mobilize ourselves we appear to be setting ourselves up for a host of unparalleled multi-generational diseases and health afflictions.

Consider the following stories from nearby Dimock, PA., reported by Jon Hurdle at Reuters on Friday March 13, 2009:

When her children started missing school because of persistent diarrhea and vomiting, Pat Farnelli began to wonder if she and her family were suffering from more than just a classroom bug. After trying several remedies, she stopped using the water drawn from her well in this rural corner of northeastern Pennsylvania, the forefront of a drilling boom in what may be the biggest U.S. reserve of natural gas. "I was getting excruciating stomach cramps after drinking the water," Farnelli said in an interview at her farmhouse, cluttered as a home with eight children would be, while her husband, a night cook at a truck stop, slept on the couch. "It felt like an appendicitis attack." The family, which is poor enough to qualify for government food stamps, began buying bottled water for drinking and cooking. Their illnesses finally ended, and Farnelli found something to blame: natural gas drilling in the township of 1,400 people.

Ron and Jean Carter suspected there was a leak when the water supply to their trailer home started to taste and smell bad after Cabot started drilling 200 yards (meters) away. Not wanting to risk the health of a new grandchild living with them, the 70-year-old retirees scraped together $6,500 for a water purification system. "It was kind of funny that the water was good in July but after they drilled, it wasn't," said Ron Carter.

Tim and Debbie Maye, a truck driver and post office worker who have three teenage children, have been cooking and drinking only bottled water since their well water turned brown in November after Cabot started drilling. But she can't afford bottled water for her animals. Her cats have been losing fur and projectile vomiting because they lick drips from the spigot that carries water from their well. Her three horses -- one of which is losing its hair -- drink as much as 50 gallons a day. "I tell my husband, 'I'm going out to poison the horses,'" she said.

The Endocrine Disruption Exchange, a Colorado research group, has identified 201 fracking chemicals and found almost 90 percent had the potential to harm skin, eyes, and sensory organs; 50 percent could damage the brain and nervous system, and 29 percent may cause cancer.

Health issues, while critical are not the only concern. In addition to contaminated drinking water and air there will also be:
The tremendous disruption of our daily lives from hundreds of large tractor trailers traversing and damaging our roads
The invasive noise of drill engines that run 24/7 and sound like jet engines
The disruption of banks of klieg lights shining 24/7
The draining of many of our lakes, rivers, streams and aquifers
The destruction of our view shed
The inability of local medical and emergency services to handle the types of chemicals and other accidents associated with gas drilling
And the devaluation of property
Unfortunately this is turning into a war to protect your water, your way of life, your family's health and the value of your property - once gas drilling starts it's too late!

WHAT YOU CAN DO

Insisting that our government is responsive to those who elect them and pay their salaries is a critically important principle of our country - and it works. Due to pressure from Catskill Mountainkeeper and other groups, the DEC has reversed their previous position and is now presenting public hearings where the public can make comments for the record. See the schedule below. Please come, educate yourself and be prepared to make comment for the record.


Catskill Mountainkeeper is not a radical organization nor are we normally given to using such strong language, but this is an incredibly important issue where the public's best interest is not being met. This is not a time when you can stand on the sidelines. The price that you will pay is too high.

About Catskill Mountainkeeper
Catskill Mountainkeeper is a member based advocacy organization dedicated to preserving and protecting the long term health of the six counties of the Catskill Region. As a representative face of the Catskills, we strive to be the eyes, ears and voice that look at issues, listen to concerns and speak on behalf of people who live, work, and recreate here. Recognizing strength in numbers, we organize concerned citizens to protect existing jobs and industry, take care of abundant but exceedingly vulnerable natural resources, and help to utilize available and often unclaimed local, state, and national funds to prevent and cushion the impact of natural disasters.

http://www.damascuscitizens. org
Posted by HospitalityGreen LLC at 4:56 PM No comments:

Guess how much trash the average hotel guest throws away every day? 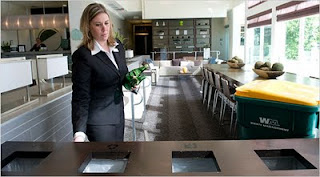 About two pounds — more than half of that paper, plastic, cardboard and cans that those same guests probably recycle at home. Yet according to a 2008 survey by the American Hotel and Lodging Association, just 40 percent of hotels have a recycling program.

While some hotels sort and recycle guests’ trash after it leaves the room, hospitality executives say starting an in-room recycling program is a lot more complicated than simply placing blue bins under the desks.

“It’s challenging,” said Brian McGuinness, a senior vice president at Starwood Hotels and Resorts, which offers in-room recycling at its Element hotels and plans to introduce similar programs at other brands by the end of 2010. “These initiatives sound easy in theory, but in practice it’s quite a different story.”

Housekeeping carts have to be modified to keep recycled materials separate from other trash, workers have to be trained in new procedures that may involve union negotiations and the recyclables often have to be sorted and stored at the hotel before being taken away — but not too far away.

Mr. McGuinness said Starwood required that the recycling center “be within a 50-mile radius of any given property” and noted that some Starwood properties would therefore be exempt from the requirement. “Otherwise, we’re hauling recycling materials in a truck burning fuel for 80 miles.”

Even educating guests about sorting their trash is not a simple matter, since recycling is one of those chores that often falls by the wayside on a trip, much like exercising or making the bed. Still, more hotels are offering recycling options, in part because surveys indicate environmentally friendly practices matter to guests.

“Doing in-room recycling is important because the guest sees that,” said Pat Maher, a former hotel executive now serving as a environmental consultant to the American Hotel and Lodging Association. He said younger guests, in particular, often asked via Twitter or other channels why a hotel did not offer recycling containers.

Besides burnishing their green image, hotels also have the incentive of reducing how much they spend to haul away regular trash. By removing paper, plastic and other recyclables from the garbage, hotels can trim their waste disposal bill by as much as 50 percent, Mr. Maher said — a significant savings in cities where trash removal is expensive.

But the savings is likely to be more modest at smaller properties in less expensive locations. Mr. McGuinness said Element was currently breaking even on the recycling program at its properties. And Kimpton Hotels, which has offered in-room recycling since 2004, estimates its total savings is about $267,300 a year.

“Just cardboard recycling alone ranges from $12,000 to $20,000 a year in savings,” said Niki Leondakis, chief operating officer for Kimpton, which reduces its trash at its 47 hotels by more than 40 percent through recycling.

“What’s happening in each individual city drives our practice,” Ms. Leondakis said. “In some cities, we’ve had to work with legislators to help get recycling programs started.” One trend that may make the sorting process less of a chore is “single stream” recycling, which refers to municipalities with recycling centers that can automatically separate paper, plastic, aluminum and glass.

Hotels are also focusing on reducing the amount of waste that needs to be recycled, with newspapers among the targets for elimination.

In April, Marriott International announced that it would no longer deliver newspapers to every guestroom in the morning; guests can request a paper or pick one up in the lobby. Although that shift is arguably as much about saving money as it is about saving trees, Marriott estimated it would reduce newspaper distribution at its hotels by about 18 million papers annually.

And Starwood has installed bath-amenity dispensers in the showers at its Element and Aloft hotels, reducing waste from tiny plastic bottles of conditioner and shampoo. But this seemingly simple shift created its own challenges.

“Even the design of the shampoo container was a large initiative for us,” Mr. McGuinness said, explaining that the dispenser had to be lockable (to prevent guests from helping themselves) and the viscosity of the shampoo had to be adjusted so it did not drip.

A bigger challenge seems to be finding an alternative to all the plastic water bottles guests rely on when they travel. Element hotels have a separate tap with filtered water in the bathroom, one of the advantages of building a new hotel with environmentally sensitive design.

But other brands have had mixed results in weaning guests from their bottled-water habit.

“People like their water bottles — they don’t want to give them up,” said Lori Holland, a spokeswoman for Fairmont Hotels and Resorts, which has experimented with offering guests carafes of filtered water instead. In some cases, guests have taken the carafes. Other objections include concerns about the cleanliness of the glassware and a preference for having a bottle of water to take to a meeting — one of the conveniences guests expect when they travel.

“I think that’s the conundrum with operating green but operating as a hotel,” Ms. Holland said. “At what point do you deliver your luxury hotel experience, but also balance that with acting responsibly?”

A version of this article appeared in print on October 6, 2009, on page B6 of the New York edition.
Posted by HospitalityGreen LLC at 8:15 PM No comments:


Ahead of the above proposed legislation, President Obama's Executive Order 13514, "Federal Leadership in Environmental, Energy, and Economic Performance," calls on each U.S. government agency to study its greenhouse gas emissions and set targets to reduce them by 2020. The order includes such environmental targets as a 50-percent recycling and waste diversion by 2015 and using printing and writing paper containing at least 30-percent post-consumer content.

The order further defines that "diversion" mean redirecting materials that might be sent to landfill be redirected to recycling or recovery, "excluding diversion to waste-to-energy facilities."

Each federal agency must, within 90 days of the issuance of the report, establish and report to the Chair of the Council on Environmental Quality and the Director of the Office of Management and Budget a percentage reduction target for agency-wide greenhouse gas reductions, with further reductions and plans to follow.

Posted by HospitalityGreen LLC at 8:07 PM No comments: