Turn on almost any faucet in Santa Fe and clear, clean free-flowing water will come out. This is a miracle. Where I live, just 20 miles south, water doesn’t come as easily. My house has no water source – no water lines, no well – other than rainwater from the sky.  It rains less than a foot a year in this part of New Mexico, most of it in the summer months, and on more than one occasion, I have turned on the tap and had nothing come out.


It’s true what they say: there is no shortage of water in the desert, but exactly the right amount. Living off rainwater in the desert takes vision: you have to be able to see past dryness to the deluge so when rain does come, often in the form of a sudden, biblical downpour, you are ready to collect as much rainwater as possible.

Floods are as much a part of this place as drought. As dry as the desert appears much of the year, its shape is dominated by the running of water. Since it’s dry most of the time, the soil doesn't seem to know what to do with water when it does come and storm scars cut deep and last for years.


Arroyos are the great gutters of this desert: rivulets lead to small gullies and then larger ones, which empty into the deep arroyos that, a few times a year, I’m told, flow in white caps down to the Galisteo River. Knowing the arroyos as deep, dry scars, I found it hard to fathom them full of water, until I witnessed an August flash flood.

One minute it was sunny, then it was a bit overcast, then rain was coming down in buckets. Rain is rare enough here to warrant stopping what you're doing to go watch it from the porch. But this time my porch was already soaked. This storm was something different. The rain was falling sideways and upside down, the wind-driven drops pelting so hard that when they hit they bounced back up towards the sky.

Squinting through the downpour, I saw a rushing, chocolate brown river raging across my driveway. This was the storm I had been waiting to see! I pulled on my water shoes and grabbed my camera and ran out into the rain. The driveway river was running fast and high enough that I would not attempt to drive across it. I turned upstream and plunged into the knee-deep fast running water without bothering to roll up my pant legs. Pants be damned; I had a waterfall to see!

I sloshed upstream, towards the spot I'd always planned on heading in the event of a storm like this: a spillway of red sandstone evidently sculpted by past floods less than a quarter mile from my house. The violent current was knee deep and frothy brown, like a melted chocolate shake – the good kind, thick with cream – and nearly as cold. 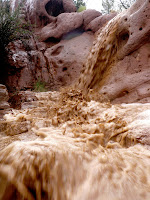 Following the roaring, sloshing river between the high arroyo banks, water borne debris – sticks and rocks and I hoped not rattlesnakes– pelted my submerged feet and wrapped around my legs and I was glad for the long pants, though they were soaked and filthy. I rounded a few bends in the river and arrived to an incredible scene: raging water had transformed the usually dusty dry place and save for the familiar rocks crowning the falls, I hardly recognized it.


Rain was pouring, thunder was rumbling, lightning was clapping and the waterfall was glorious, falling like rushing chocolate and churning madly at my feet. A flood in the desert! I had to see it to believe it. 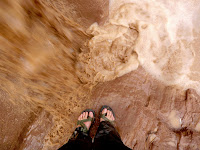 In a one-inch rainstorm, a thousand square foot roof will catch 650 gallons of water. In that one spectacular summer storm – which loosed more rain than in the previous nine months combined – my roof collected enough water to last me through most of the winter. And that’s not even as wet as it gets out here. Heading west from my house across BLM land, I can hike to the Galisteo Dam, a massive flood control dam built in 1965 to hold back 100-year floods. As far as I know, they've never come, but there’s still time.

Standing at the top, on the edge of the dam, among bright red and pure white sandstone slabs – the red dotted with chartreuse lichen, the white decorated with delicate fossils of frozen grass – I finally saw the need for the dam: the land below is rippled by giant flood waves.
Only from this vantage, high above the desert, could I begin to grasp the vast expanse of time preserved here. Millions of years ago, this landscape was underwater, drowned beneath an inland shallow sea. Much later the Cerrillos Hills and Ortiz Mountains littered the ground with glittering shards of volcanic rock.

This desert is made up of millions of years of these layers, layers of Earth, layers of life. Studying these layers from the top of the dam, our own layer of Earth, the uppermost crust we live upon, love upon, ransack and pollute upon, becomes ever so humbly thin.

The rains will always come again, but there’s no telling when. In our lifetimes the deserts are desertifying: trending drier and drier, with longer and longer waits between deluges. How dry is too dry? How long is too long? Better to learn the weight of water, before those miraculously free flowing taps run dry.

Posted by HospitalityGreen LLC at 9:32 PM No comments: